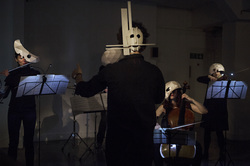 Ewan Campbell’s compositional preoccupations tend to be in the field of translation from other art forms into music, which makes him apt for collaboration. He studied music at both Cambridge and King’s College London, where he achieved a PhD under the tutelage of George Benjamin and Silvina Milstein in 2013. Ewan supervises in contemporary music and composition at Cambridge University, and is a visiting artist with the Aldeburgh Young Musician Scheme.

Ewan was appointed as Composer in Residence at Cambridge University in 2012/13 and has been an award winner in several international competitions including, the New York-based Counterpoint Competition (2011), the Forme uniche Competition in Adelaide (2012) and the Italian ﻿﻿Mare Nostrum Competition ﻿(﻿2012). His works have been performed by ensembles including: The Britten Sinfonia, The Küss Quartet, the Fukio Ensemble, Lontano, Ensemble Matisse, Thomas Gould, Clare Hammond, and in 2016 he will be writing for the London Symphony Orchestra. He has had works released on the Italian Retropalco label and in the UK by Champs Hill Records. 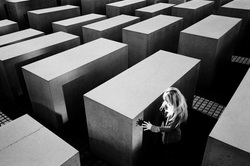 Stef Conner’s music breathes new life into ancient texts and forges channels of empathy into the deep past, taking inspiration from the emotive power of ancient poetry, folklore and lost oral traditions.  Although rooted in the classical tradition, her musical language is distorted into something utterly different through the vivid palette of sounds that have been absorbed into her style, from ancient Korean court music, Zhou Dynasty bronze bells, medieval chant, English folksong and Anglo-Saxon poetry to Spectralism, free improvisation, experimental music and post-tonal harmony.

Her work has been performed in China, Europe, the USA and the UK, at venues including Huddersfield Contemporary Music Festival, York Minster, Lichfield Cathedral and the Royal Festival Hall, as well as on BBC and international Radio. Performers of her music include The Esoterics, ﻿Queens’ College Choir, ﻿The Unthanks,﻿ ﻿Juice,﻿ ﻿The Kreutzer Quartet, ﻿﻿The Nieuw Ensemble,﻿ ﻿The Renaissance Singers,﻿﻿ Cadenza,﻿ ﻿Dark Inventions,﻿ ﻿John Potter﻿, ﻿members of Ensemble 10/10 and ﻿the Philharmonia Orchestra﻿. She has been awarded several prizes for her work, including the RPS Composition Prize in 2011, and was named one of the Evening Standards 1000 Most Influential Londoners in 2014. She is the current Composer in Residence with Streetwise Opera. 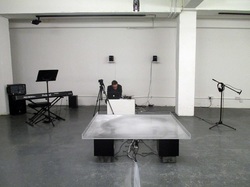 Chris Roe is a composer based in London, working on a variety of projects from orchestral commissions, to independent film scores and theatre soundtracks. Described as “brilliantly unnerving” and “highly energetic”, Chris’ music has been performed throughout Europe, and his orchestral piece, ‘In Search of Strategy’, was recently broadcast on BBC Radio 3. He is also currently writing for innovative percussionist Joby Burgess as part of Sound and Music’s Portfolio Scheme.

After graduating from the Manchester University, Chris studied on the RCM Masters course with Kenneth Hesketh, graduating with distinction and the Adrian Cruft prize.  Chris has worked with groups including London Sinfonietta, l’Arsenale, the Riot Ensemble, Tête à Tête and NonClassical, and his piece ‘Wired’ was recently published by Donemus. Other awards include second prize in the International Lutoslawski Competition, the Prix Annelie de Man audience prize, and first prize in the International Dvorak Composition Competition.

Chris is also founder and conductor of ANIMA, specialising in performances of contemporary music with abstract film, most recently performing 42 feet under the river Thames in the Brunel Tunnel Shaft.