The Pierrot Project presents an evening with a concert and exhibition that has been curated in response to the key themes in the second part of Schonberg’s ‘Pierrot Lunaire’. It features work from a range of artists in the mediums of contemporary composition, photography, sculpture and horticulture, and examines ideas of mortality with the cycles of nature and their interaction with religious doctrine.
Ewan Campbell’s twin compositions ‘Inuent’ and ‘Exuent’ chart the beginning and the end of life, and set poems that depict the fallen leaves of London, severed hands, plummeting stars, raised flags and hanging bodies to music. Darren Bloom’s semi dramatic ‘Eve’ conveys his subject’s seduction in the Garden of Eden but the serpent, while Chou Wen-chung’s ‘Ode to the Eternal Pine for chamber ensemble without voice’ reflects on the Chinese term ‘tian di ren’, which translates as ‘heaven, earth, humanity’. The non vocal works ‘Music of Amber’ by Joseph Schwantner and ‘Expressions of Sea Level’ by Aaron Holloway-Nahum complete the programme with reveries upon nature.
The artworks on display focus particularly on the perpetual cycles of birth and death in the natural world. Rose Robson's taxidermy sculptures are crafted from amalgamations of different species of bird. These macabre and carnivalesque creations reveal the naturally occurring palette of iridescent blue, green and purple in these creatures' plumage and the undulating form implies a perpetual motion that is resistant even to death.
Sara Naim's large-scale photographs appear like vast sublime landscapes but are in fact macroscopic renderings of her own dead skin cells. Her work is a phenomenological meditation on how we encounter the world through our bodies and negotiates the sinuous line between our interior and exterior physicality.
Tim A Shaw draws attention to the mechanical processes in any living body in his 'Splice' fish light sculpture. Preserved with lacquer, the fish's shiny skin remains wet to the look but it sits uncannily still. Black flex protrudes from its mouth as though being regurgitated and the bulbs are seemingly lit from its own strange life force. They encourage the viewer to consider what elements of their own body operate like automata.
Landscape architect Joh Bates also contributes an interactive plant installation for the evening that provides a living setting for the concert. The installation reflects on the idea that 'the otherworld is not deep underground; it is just one step aside from our own. Things can exist in both places at once - and things can be pulled from one to the other.' 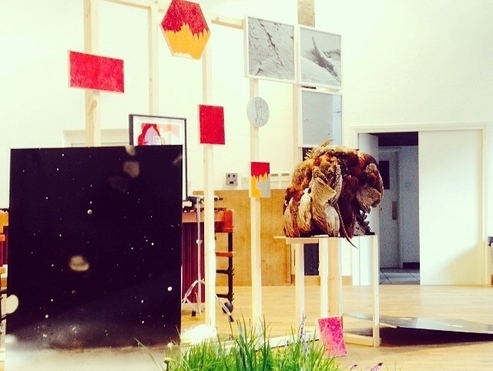