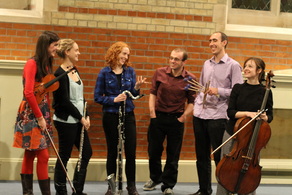 The Dr K. Sextet formed at the Royal College of Music in 2009.  The group consists of members from a diverse range of musical backgrounds, including contemporary, traditional and ethno-musicological influences, and are committed to using this combined musical experience alongside working with young composers to create fresh, exciting new music.  They have performed widely around the UK featuring at numerous venues including the Forge Camden, the Edge Music concert series and Southwark Cathedral, and recently featured on BBC Radio 3 ‘Late Junction’.  International appearances include an unforgettable appearance at the 2012 Harare International Festival of the Arts.

Dr K. were ensemble in residence for the inaugural Cheltenham Music Festival Composer Academy 2013.  They premièred new works by some of the most exciting international young composers to critical acclaim, receiving praise from many top industry professionals.  A review of the Academy in The Guardian can be found here http://www.theguardian.com/music/2013/jul/09/composer-academy-review

The group is passionate about creating new music as well as performing contemporary classics and has worked with several composers, both established and emerging including Kenneth Hesketh, Tom Armstrong, Arne Gieshoff, Aaron Holloway-Nahum, Daniel Kidane and numerous others.  They have also recorded works with several of these composers, and have previously been sponsored by the Tillett Trust, the Anglo-American Music Trust and the Hinrichsen Foundation.

Dr K. are dedicated to bringing new music to a wider audience and to young people.  They hosted a festival of new music at St Barnabas Dulwich working with the St Barnabas choir, local schools and young composers to create an exciting weekend of workshops and concerts.  They have also performed in outreach concerts through the Cadbury Foundation and the Royal College of Music, worked with Cambridge Youth Music in 2014, and gave workshops in local orphanages whilst in Zimbabwe. 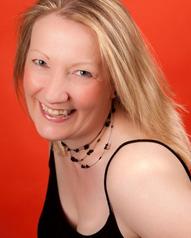 Lesley-Jane Rogers is heralded as one of the most versatile soloists of today, and is renowned for her captivating and evocative performances.  An established concert soloist, she specialises in oratorio, “vocal concertos”, solo cantatas, recitals and contemporary music, and has a vast repertoire of several hundred works.  She studied singing and piano at the Royal Academy of Music where she won several prizes, and in 2003 was made an ‘Associate’ in recognition of her eminence in the profession.

A keen exponent of contemporary music, Lesley-Jane has given more than 70 premières, and is honoured to be the dedicatee of various songs and song cycles.  Large-scale premières include Joseph Phibbs’ Tenebrae, and Michael Finnissy’s Favourite Poets, but it is perhaps for her numerous chamber music recitals that Lesley-Jane is best known.

Lesley-Jane has worked with many leading conductors and orchestras, and her discography numbers some 30 CDs, including several new-music releases for the specialist label Metier, as well as discs for the Divine Art, Toccata Classics, Campion/Cameo, Hyperion and Prima Facie labels.